(Was going to be a) Review: Razorlight – Before I Fall To Pieces EP

…Because we’re not all quite sick of this song already. Actually, no, I jest, but you have to admit that, like all Razorlight EPs to date, it’s had a huge amount of airplay.

Why all the airplay? Well, although (contrary to rumours) millions of people can actually be wrong, the song’s quite catchy. Hell, you all know it’s catchy, you’ve probably got it right up there in your head, ready to be pulled down at any moment as the situation may demand.

So, next question: why the review? They covered Teenage Kicks (by the Undertones, and incidentally John Peel’s favourite song) for track 2, and an audacious attempt like that deserves, nay begs for review. They’re joining an odd bunch of melody-thieves, since bands like Green Day and Therapy? and Ash have also covered this track. Oh, and so has B*sted. Apologies for the cuss-word, but the disparity has to be noted.

The very first thing to note is that it’s a live recording. The first thing this calls to mind is America. Not the country, duh, but the single. Remember the fan-screams mixed in at the beginning? That seems to be a recurring theme. They want us to believe that they’re a bona fide proper proper non-commercialised band who can actually play live shows, which is what sells more records.

Anyway, the second thing to note is that their version sounds… well, just like the old version. Just like the other versions. A version. Nothing to see here, folks.

Thing is, all the other bands know they’re good, too. And they’re trying to piggyback on that Razorlight magic, that skinny-trousered Russell-Brand-haired pretend-rebellion. Listen to any “up and coming” list/ compilation / etc, and you’ll find hours and hours of Razorlight-esq posing. It’s getting hard to sift the good from the mediocre from the downright dull. It’s a whole other argument, the “Internet music: for good or for bad?” argument, but one thread of that discussion is very useful here: there’s definitely room to argue that we’ve been flooded with too much of a good thing.

British Indie Rock is all starting to look the same. There are too many bands out there, all being heard at the same time, all with their dedicated little street teams and thousand-fold adoring MySpace friends. All sending out their damn pointless and annoyingly desperate MySpace bulletins, and all ultimately grasping at the same straws. Think endless bad promos from the increasingly-desperate Lorraine, and you’re in the right frame of mind.

Everything sounds alike. The Scissor Sisters sound just like Beck (and why oh why does nobody ever point this out?), Busted sound like Green Day, and now Razorlight are trying to sound like The Undertones. New music is not just the same as old music, but it’s the same as all the other new music.

And now we don’t even have the brilliant old-as-time sure-fire way of kicking them out – even if you don’t buy their music, you can’t avoid seeing these pillocks all over the inter-web. They don’t need your money any more. They’re like some weird mutant brand of phoenix – kick one down, and three pop up to take its place. It’s like a horror movie. Revenge of the Russell Brand-a-likes. (More on that cnut later)

God knows how fast Peelie’s spinning in his grave now, but by the end of the year he’ll be able to provide electricity for a street of terraced houses. [/cliche] 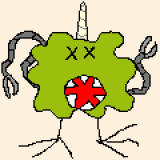 Want to hear something fresh? I don’t think I sound like anything else! (What a way to advertise myself, heh)

Nah, I am quite unique though. My music sounds more like horror scores than anything else. Take a look on my website! But turn your speakers up, coz the recordings are quiet for some reason:

“Humanitarianism” is my favourite. Pure horror 😛 So is “It’s A Psychological Horror”, as the title suggests. “Future Now” just sounds wierd though. I don’t really know what to compare that to.

I do agree with you about new bands mostly sounding like somebody else though. Welcome to the mainstream world, heh. It’s not about the art anymore, it’s about the money.

Absolutley. I cant believe that we live in a world where Franz Ferdinand are considered a bit edgy.

Its all so middle of the road you find yourself dodging traffic.

As for myspace, the cream will rise and PR and talent, to a degree, will lawys be the seller of records, not mad myspace obsession.

We, for example, have nearly 6000 friend without particulalry trying while some bands I know have a couple of hundred after months of adding and adding. At the end of the day we both currently play in toilets to 25 people.

Wait until the PR kicks in. PR companies will be the new record labels while the majors, all with their heads in the digital sand, try to offload their record compnaies and focus on the nicely profitable business of publishing.

When the dust settles- and it will settle- onoly a few bands will rule. The ones with the abitliy to adapt and the ones that are genuinely trying to bring something new to the table!

I think the scissor sisters sound more like Elton John than they do Beck.

What keeps me awake at night is the striking similarity between The View’s “Same Jeans” and Brimful Of Asha by Cornershop.