My current love, as far as music is concerned, Patrick Wolf is releasing his third album this year. More details on the musical aspect of the album in the full-length interview i did with the lovely Mr. Wolf elsewhere on rawkstar.net.

Some more news have later emerged though. The album will be named “The Magic Position” (the mind boggles…) and will be released on Loog/Polydor. Which means, ladies and gentlemen, that the wolf is going big time.

Along with the prospects of a new Biffy Clyro and maybe an Arcade Fire album in 2006, I am very very excited. 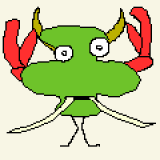